Suppose you or your family were injured because of the carelessness of a “third person” as lawyers say, i.e., because someone else messed up. Suppose further that you are forced to file a lawsuit against that person and you need documents from his employer or from a corporate affiliate that is not a party to the case for tactical or legal reasons, e.g., jurisdiction or limitations of actions. Is the person you sued obligated under law to obtain and provide you those documents? 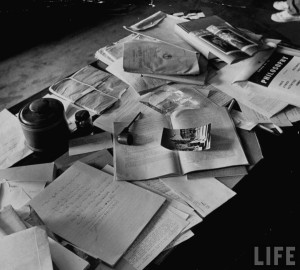 (The above is a photo of Albert Einstein’s desk the day after he died).

The relevant Rule of Civil Procedure provides:
Rule 34. Producing Documents
(a) IN GENERAL. A party may serve on any other party a request within the scope of Rule 26(b):
(1) to produce and permit the requesting party or its representative to inspect, copy, test, or sample the following items in the responding party’s possession, custody, or control
That person has to obtain and provide documents within his “control.” Case law interpreting control is rather broad, if not uniform. As stated by one federal court:

Note that courts in the 10th Circuit (Colorado, Kansas, New Mexico, Wyoming, Oklahoma and Utah) have applied both the “Practical Ability Standard,” Legal Rights Standard,” and “Legal Right Plus Notification Standard,” thus:
Tomlinson v. El Paso Corp., 245 F.R.D. 474, 476 (D. Col. 2007) (“‘Control’ comprehends not only possession, but also the right, authority, or ability to obtain the documents.”); Ice Corp. v. Hamilton Sundstrand Corp., 245 F.R.D. 513, 517 (D. Kan. 2007) (“Production of documents not in a party’s possession is required if a party has the practical ability to obtain the documents from another, irrespective of legal entitlements to the documents.”.